A colourful note:  razzle dazzle rose crayons appeared as a new entry in the Crayola Fluorescent Selection in 1990.  In actual fact, it was not a new colour, just a new, fun name for the previous Hot Magenta Fluorescent.  Why the change, I don’t know, especially as they also brought in a slightly different shade of magenta crayon and named it Hot Magenta! 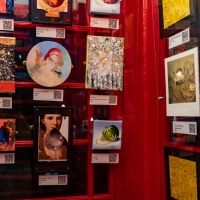