This giant bronze statue, The Destroyed City (De verwoeste stad), stands as a reminder of the German bombing of Rotterdam on 14 May 1940, that destroyed the medieval centre of the city. The image below shows what remained of Rotterdam after the clearing of the destroyed buildings.

The statue is the work of Russian-born French sculptor Ossip Zadkine, who described it as “A cry of horror against the inhuman brutality of this act of tyranny”. It received much criticism upon its arrival, but is now seen as an important element of the city and was registered as a Rijksmonument in 2010.

The heartless man has acquired many nicknames from the residents of Rotterdam over the years, including “Stad zonder Hart” (City without a heart), “Zadkini”, “Jan Gat” (Jan Hole) and “Jan met de Handjes” (Jan with the little hands).

Posted as part of Saturday Sculpture

5 thoughts on “City without a heart” 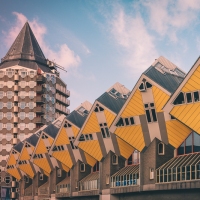