I pray for air in the water

Reykjavik has been decorated with some giant murals, many of which were created as part of a Wall Poetry project that ran in 2015 and 2016, in connection with the Iceland Airwaves music festival. The Berlin-based arts organisation, Urban Nation, curated the projects and brought in a great mix of street artists to interpret the music of the artists from the festival.

The piece shown here was the work of Norwegian artist Anders Gjennestad, known as Strøk, interpreting the song “I pray for air in the water” by the Icelandic rock band, Mammut. It was part of the November 2016 project. 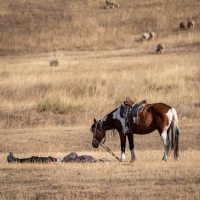 Remains of the Tower of St Elsyng Spital, London, November 2022 Read more about this tower and see it in black and white here.   – Copyright Debbie Smyth, 22 November […]
Taking a pause at Elsyng Spital
Loading Comments...
%d bloggers like this: