St. Mary’s Church, better known as the Hidden Gem, was founded in 1794 in the centre of what was then, the poorest quarter of Manchester.

A priest, Father Broomhead, purchased a plot of land in Mulberry Street for the erection of a new church, dedicated to Our Lady’s Assumption into Heaven. The Relief act allowing Catholic churches to be built again as churches was passed in 1791 and the construction of St. Mary’s began in 1792. The official opening of the church took place in November 1794, making this the oldest Catholic church in Manchester .

Rev Arthur J. Dobb, an Anglican historian, commented in his “History of the Diocese of Manchester” of 1978 that “The Roman Catholic Church sought to tackle Manchester’s deepest troubled area which lay between Deansgate and Albert Square. A church was built in 1794 in Mulberry Street on a site crowded in by intensive poor-quality housing on land which had so recently been open meadow and grazing pasture.”

In 1833 Father Henry Gillow decided to re-roof and redecorate the church. However, the work was not overseen by a master builder and was therefore suspect. In 1835 most of the roof collapsed, causing significant interior and structural damage.

An outbreak of plague in Manchester around that time, and Father Gillow’s death from Typhus in 1837, made the search for a new site for St. Mary’s difficult resulting in a decision to rebuild the church on the same site. The architect chosen was Matthew Ellison Hadfield.

The resulting current day church is built in red brick, typical of Manchester’s buildings of the time, with an ornate stone doorway. 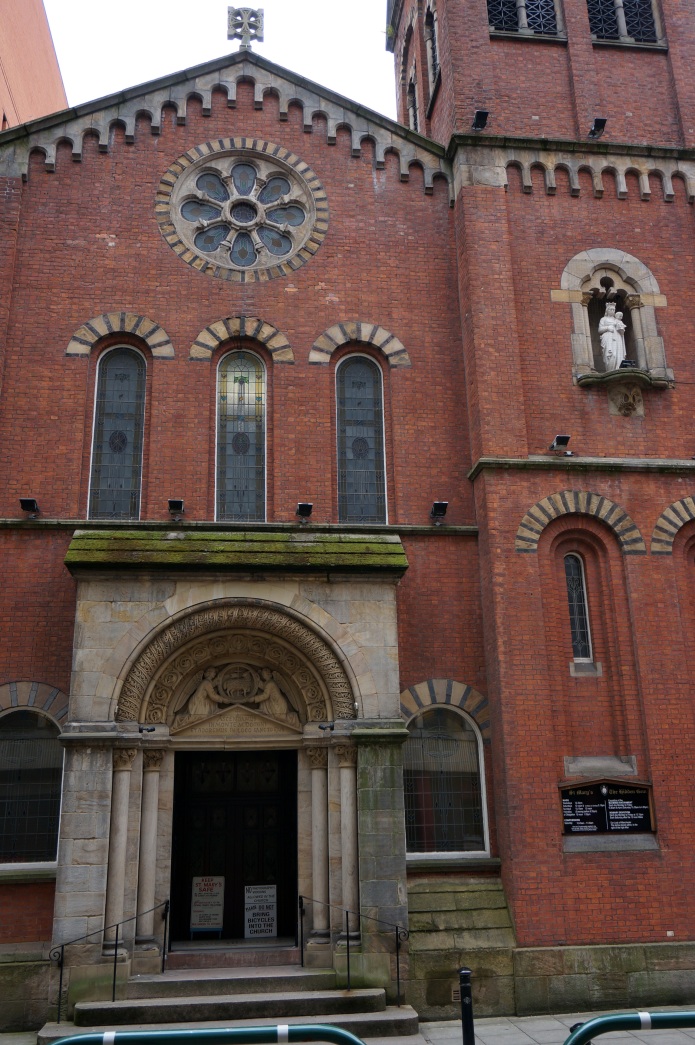 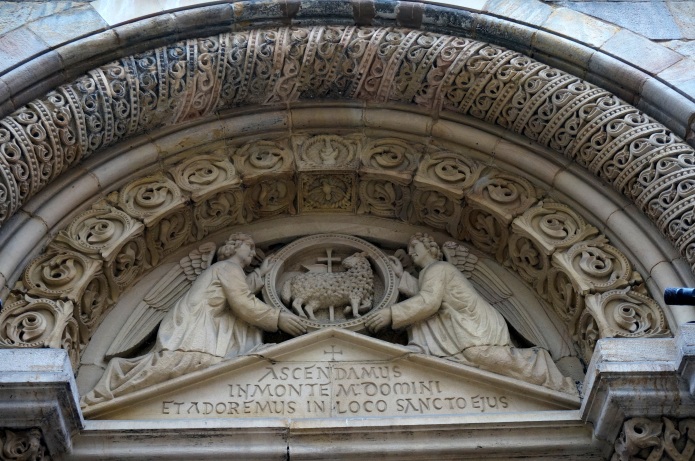 The entrance has attractive mosaic flooring and stained glass to the side. 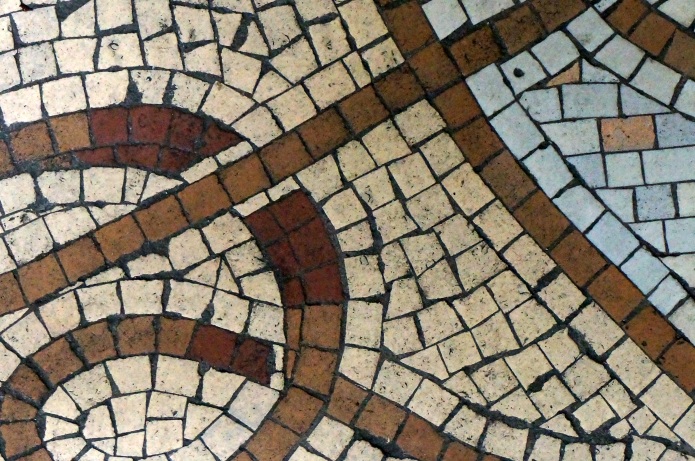 However, this delightful church, is better known for its interior architecture and artwork.  Of particular note, is the series of modern art paintings of ‘The Stations Of The Cross’ painted by the late Royal Academy member Norman Adams.  Adams was considered by many to be the leading British religious painter of the 20th century and his 14 pictures are startling and imaginative depictions of the Passion of Christ.  These stunning paintings prompted Sister Wendy Beckett, recognised art critic and now of tv fame, to declare:

Photography is not allowed inside the church, but you can click here to see images of the famous paintings.

To visit and see this delightful church for yourself, head to Mulberry Street in Manchester city centre.  It is tucked away, but not as hard to find as its name might suggest.  In fact its name first came about in 1872, when Bishop Herbert Vaughan, the second Catholic Bishop of Salford, commented that:

“No matter on what side of the church you look, you behold a hidden gem”
.

For an abstract view of this charming church, click here. 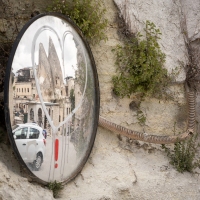 I loved my time in Göreme

Göreme, central Turkey, May 2022 Now over to all of you. Do come and join us in our Saturday six-word musings. I’ll admit that many of us openly break the […]
I loved my time in Göreme

Cappadocia, Turkey, May 2022   Copyright Debbie Smyth, 27 May Posted as part of Weekend B&W …
Shepherd at work

Istanbul, 2014 Yes, I’m off on my travels for a couple of weeks. I’ve scheduled a few posts but I’ll be quiet on comments. See you soon! Now over to […]
I googled my symptoms – holiday needed!
Loading Comments...
%d bloggers like this: