Blue Boy or Doctor Who?

A yarn bombed Blue Boy in Exeter in August 2015

The Exeter Free Grammar School opened in 1633, on the upper floor of the medieval buildings of St John’s Hospital, which had stood on the south side of the High Street since the 12th century.   On the ground floor beneath this, was established the English Free School.  A uniform of blue caps and gowns was introduced for the boys of this Free School, leading to the pupils being nicknamed Blue Boys. A least two small statues of a Blue Boy were made, and one was placed at the entrance to the main hall.

The two schools separated, moved, developed and changed over time.  Sadly, the original ancient school buildings were destroyed in the bombing of Exeter in May 1942. Post-war, the damaged area, close to the cathedral, was demolished and cleared and repleaced with the Princesshay shopping area, which opened in the 1950s.  The Blue Boy statue that had stood outside the old school was salvaged and placed on a plinth in the precinct, at a spot that marked the original position of the main entrance of the school.

In 2005 the old shopping area was destroyed and replaced with a modern mall.  The work to develop this area included archaeological investigations and some of the findings, including Roman tiles, can now been seen in the retail area, which opened in late 2007.  And a very blue Blue Boy is still there to remind everyone of the area’s history.  When I met him in 2015, he was exuberantly yarn bombed as well as brightly blue!

A colourful note: Navy blue was a new name and a new colour for Crayola in 1958.  Theirs is a very bright shade of what is traditionally a very dark blue, named after the uniform worn by the officers in the British Royal Navy since 1748 and subsequently adopted by other navies around the world.  As regards the use of navy blue as a colour name in English, the Oxford English Dictionary has an example dating back to 1813. 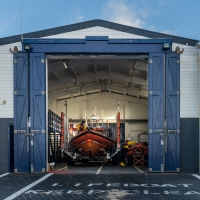 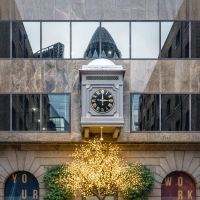 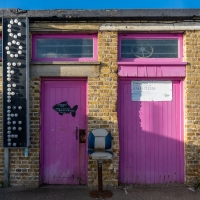 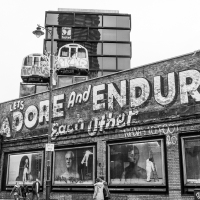 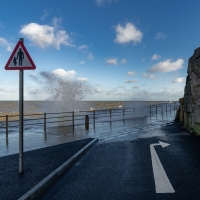 Street art in action, Corbet Place, London, December 2021 Click here to see the finished product. Welcome to One Word Sunday, and over to all of you to join the […]
Action

Amazing services provided by these volunteers

Getting ready for a rescue mission, Margate RNLI, Kent, January 2022 Both Margate boats were dispatched to support Whitstable RNLI and the Coastguard Rescue Teams from Margate and Herne Bay […]
Amazing services provided by these volunteers

Looking for the Gherkin

London, December 2021 As skyscrapers continue to spring up in London, it gets harder and harder to find some of the older ones, especially one of my favourites, the Gherkin. […]
Looking for the Gherkin

Bass Rock, Firth of Forth, Scotland, August 2016 and April 2019 There are a few places where I just cannot resist returning and taking more photos. Bass Rock is one […]
Birds at Bass Rock

In October I took you on a tour around a small section of Sicily, following a wiggling line from Scicli, heading northish to Ragusa, then Siracusa and finally to Catania. […]
Squares in Sicily
Loading Comments...
%d bloggers like this: