A fictional tour of Spain

It’s time for this month’s chain of reading, set off by Kate’s Six Degrees of Separation, in which we are invited to build a chain of six books that bear some form of connection to the one before them – be it author, theme, style, location, title, era, language, ….. – all starting from a book suggested by Kate.

This month, the start of our reading chain is triggered by Patricia Lockwood’s No One is Talking About This, a book that looks at the ups and downs of living online.

My first step is Leaving the Atocha Station by Ben Lerner.

Why start here? Well, for at least the first half of the book, I felt that it could have been titled No One is Talking About Anything. There is also a section of the book that is a lively conversation by text messages, and I felt the speed and reality of the story change at this point.

It is the story of poetry student, Adam Gordon,  working, or at least putting on the act of working, on his fellowship in Madrid. I found it to be an amazing collection of words that almost have meaning but not quite. His own words summarise this:
“I’d said, as usual, nothing of substance, but the nothing I’d just said languished between us … and the silence we were now maintaining was the mere absence of sound, not the swelling of potential meanings.”

Later in the book, Adam’s own self-confidence grows and the story grows with him. I don’t think it’s a book I’ll read again, but I enjoyed it in the end and it’s interesting if you enjoy words and playing with language.

Next, we focus on Spain again, with another young man on a trip of self-discovery and escape in As I Walked Out One Midsummer Morning  by Laurie Lee.

I had read, and not really enjoyed, Cider with Rosie at school, but moving out of Gloucestershire to Spain and Civil War with Lee was much better. It was one of the first travel books I read and I think it helped fuel my love of Spain.

Jason Webster’s Duende takes us on another journey of discovery with a young man, this time it is the author seeking an understanding of flamenco. I found the start of the book slow but it picks up pace as Webster’s flamenco-ness grows. I added my own atmosphere to the book at the start by listening to flamenco while I read. For musicians, especially guitar players, I am sure the detail in here will be of great appeal.
I am now fascinated by the history and the ever-changing nature of flamenco and am looking forward to getting back to Spain to listen and watch flamenco in real life. Click here if you fancy some music to accompany this post.

Or The Bull Kills You is the first in Webster’s Max Camara detective series. Set in Valencia in the bull fighting business, we find a great crime thriller and a new detective. It’s step four in my chain of books, and finally one that I really enjoyed, despite the involvement of bull fighting. An easier read than the previous three, I’ll admit, but it contains a great feel for Spain, and I have now read and enjoyed the whole series.

Where shall we go next? Let’s stick to some more of Spain, with Hemingway’s first novel and a link to the culture of bull fighting.

With just one more in our chain of six to go, we’ll stay in Spain but with a new-to-me author.

John Banville’s April in Spain was a great read. It is a real page turner, with its complexity and mystery growing as you turn more of them.

There were some similarities between Quirke in this book and Adam Gordon back at the start of my chain of six, with play-acting and lively defence against imagined fears (though one of those is not so imagined in the dramatic ending). There’s also a link to the passion and drama of flamenco levels – in hat shopping – when Quirke’s wife describes it as “very dramatic, very duende”.

As you see, I’m ending with one I thoroughly enjoyed, and I’m not the only person that loved it. The words used by the newspapers in their reviews include ‘Superb’ (The Times), ‘Outstanding’ (Irish Independent), ‘Exquisite’ (Daily Mail), ‘Hypnotic’ (Financial Times), ‘Compelling’ (Sunday Times). I highly recommend it and will definitely be reading more Banville.

I hope my chain of six pieces of fiction prompts some good reads for you too.
Next month we’ll be setting off from a great classic and an author I love: Graham Greene’s The End of the Affair. I wonder where that will take us.

Note: Most of my links this week are to Hive, an online bookseller that gives part of the income to local booksellers, and you get to choose the bookshop you’d like to receive the benefit. I’m delighted that my local bookshop, Books on the Hill, is on the list, and have been happily supporting them in this way.

Posted as part of Six Degrees 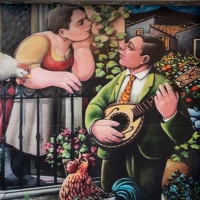 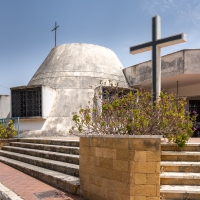 The power of music

Palermo, Sicily, June 2022   Copyright Debbie Smyth, 4 July 2022 Enjoying street art has become a regular event on my travels around the world: more of my findings can be […]
The power of music

A friendly visitor at my window

Sicily, June 2022 – iPhone 11 Now over to all of you. Do come and join us in our Saturday six-word musings. I’ll admit that many of us openly break […]
A friendly visitor at my window