This rich, dark blue was one of the original Crayola crayons back in 1903, featuring under two names, Dark Blue and Prussian Blue.  The Dark Blue name was discontinued in 1917, and in 1958 Prussian Blue was renamed to the current term, Midnight Blue.

Referring to the moon-filled sky at midnight, the first recorded use of midnight as a colour term in English was in 1915.

Part of Color Your World 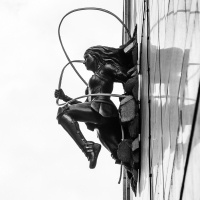 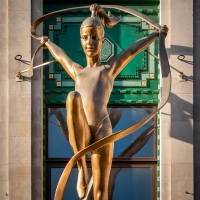 From Glasgow to Avignon

. It’s time for this month’s chain of reading, set off by Kate’s Six Degrees of Separation, in which we are invited to build a chain of 6 books that […]
From Glasgow to Avignon

Ready for a bit of travel to bring some brightness to your life? London, March 2021   – Copyright Debbie Smyth, 10 April 2021 Posted as part of Becky’s April […]
Bringing a little brightness

A Barbican resident takes a stroll

Barbican, London, March 2021 Now over to all of you. Do come and join us in our Saturday six-word musings. I’ll admit that many of us openly break the numeric […]
A Barbican resident takes a stroll

Reflections at the Barbican

Towers of the Barbican reflected in the lamps, London, March 2021   Copyright Debbie Smyth, 9 April 2021 Posted as part of Weekend Reflection …
Reflections at the Barbican

Dancing with ribbons on Oxford Street, London, March 2021 Bourne & Hollingsworth was a large department store in an 1894 building on Oxford Street. It was remodelled in the late 1920s in […]
Bright ribbons
Loading Comments...
Comment
×
%d bloggers like this: